We Never Have All the Information

One learns a lot of things at Yoga Teacher Training (YTT): asanas and yogic principles, anatomy, and sequencing, for example. It’s intensive in itself. Add to it tight quarters with strangers, lots of time for inner reflection, and heightened sensitivity and it all results in other lessons too, insights into the self or into life. Last time, I wrote about my mystical experience with a soap bubble, a lesson of our insubstantial nature. In this post, I’ll share another big lesson learned on my recent YTT experience in Ibiza, Spain.

In short: we never have all the information or all the pieces of the puzzle. It’s the nature of duality. Yet we are fabulous (and hell-bent) at generating meaning and judgments around very the sparse information we do have, convincing ourselves that what we’ve generated is absolute reality. In fact, though,  details are always missing.

Our entire lives, if we don’t wake up to this realization, we are constructing confining and very often inaccurate boxes to place ourselves, our situations, our solutions and other people into. We leave little room for miracles, let alone facts. But the facts that might be outside of our perception  might be enough to completely and irrevocably destroy those seemingly safe little boxes that give us the false sense that we’ve got it all figured out.

It all comes down to protecting ourselves. We are afraid of being neglected or disappointed, rejected or just plain wrong. This is the energy that lies at the heart of the need to draw conclusions, however erroneous.

During YTT, I had volunteered to make breakfast one Saturday morning which historically consisted of oatmeal. Yet, after searching every drawer and cabinet, I could not find any oats. My mind, afraid of being accused of neglecting to provide what was expected, turned on those who were supposed to provide the goods in the first place!  I went about preparing what remained…eggs, fruit,  yogurt, granola, cheese, avocado, bread and tomato. I made my apologies, “There were no oats!” It wasn’t until later that day that I was in the kitchen when the damn bag of oats stared me right in the face. It had been on the counter all along. Seriously. Right in from of  my face! Yet I had gone on a very long journey in my head which was based entirely on them not being there.

On another weekend, the house ran out of bottled water. Several of us emailed the facilitators to let them know. We waited…and waited. More emails were sent. We waited some more. The conversations that occurred around this were interesting. In my own mind, I began to question the amount of concern and care our facilitators had for our well-being. Having had an earlier interaction with them over water, I was holding that opinion as loosely as I could.

The water came eventually, along with someone who had just arrived that day at the airport. You see, it turns out, the facilitator that eventually brought the water had to pick someone up.  She had other responsibilities. This is what delayed her.  On the way, they stopped for water and couldn’t find any big bottles anywhere. They ended up getting small bottles. So, the effort was there all along. The concern and care was there all along too. But there were extenuating circumstances of which most of us were unaware. We didn’t know what we didn’t know, and so there was nothing to stop us from expressing our grumps. But how often do we grump with pieces of the greater puzzle missing? How often do we seek out validation from friends and loved ones that we are justified in our thinking about something? How often to we lack insight into situations pr  motivations, past histories, and personal challenges of those we judge? 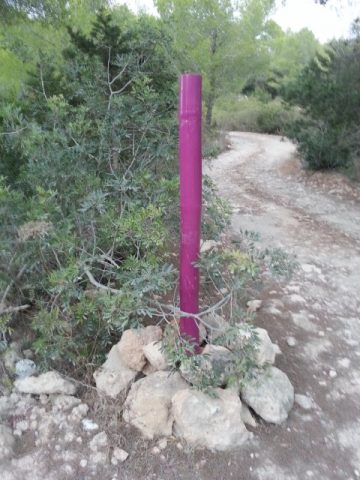 In another example, when I  arrived at the house on the first evening, I was in a shared cab. We were told to look for a pink rock and turn there. What we eventually came across was a pink post on the left side of the drive that I could barely see in the dark from out the right side of the taxi. I couldn’t help thinking to myself, “That’s not a rock!” I took a photo of the post to show my partner just how “ridiculous” our directions were. It wasn’t until nearly three weeks later on a walk up the road that I could finally see the “pink  rock” on the right side of the road. There it was…and had been, invisible to me from the right side of the cab. I admit, I formed judgments about the directions we were given while lacking this broader realization! 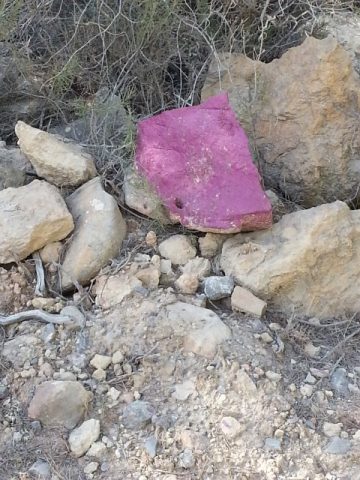 So three weeks later, I took a photo of the rock to remind myself of how ridiculous I can be! Now I have two photos that tell a story and remind me of this very important truth:

We are always missing information.

Always. The universe is that big and that complex. And no matter how much we want to make ourselves feel safe, secure, and like we’ve got it all sewn up, we don’t, won’t and can’t possibly.

Really, accepting this makes life so much easier. It becomes just plain silly, not to mention counterproductive,  to jump to conclusions.

LOL – I just remembered a song by Annette Funicello about not jumping to conclusions, a throw-back to age 10 or so. The universe has been trying to teach me this one for a very, very long time! A shame I spent over 15 years of my life thinking I understood the 2nd Agreement of The 4 Agreements by don Miguel Ruiz: Don’t Make Assumptions. It’s clearer now. So, I’m a little slow!

If we can hold everything more lightly, our opinions, judgments, explanations and seeming realities for why things are the way they are, we might actually get an insight or two into actual reality! We give ourselves so much more space to breath, to receive more of that missing information (or not), and just maybe to receive a miracle or two.

Lessons from Yoga Teacher Training – Part II
Get the Newsletter