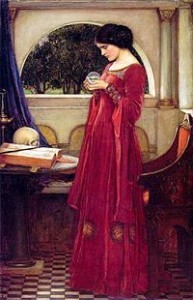 I’d never seen or heard of a Chinese magic mirror, not until investigating the use of mirrors in magic for this site. I didn’t get far in my research, because I became fascinated with this ancient art. When I first read about it, I had a hard time wrapping my head around the concept. Seeing was believing; this video made it quite clear:

The magic mirror dates back to the Han Dynasty of China (that’s about 206 BC to 24 AD). They are made of polished bronze on one side and an intricate design on the other. When one holds up the polished side to a light source, the symbols on the back side are projected mysteriously, as if the whole thing is transparent.

Apparently, some mirrors exist that actually project an entirely different or secret image than the one carved into the back of the mirror. Fascinating! Now I want one!

The Chinese Magic Mirror
Get the Newsletter