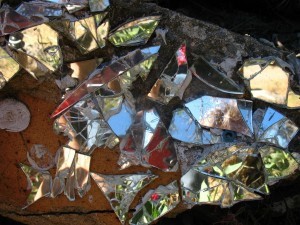 Many of us know that if we break a mirror, it is considered to be 7 years bad luck, but I’ve never met anyone who could tell me why. Fortunately, I’ve never had the misfortune. Have you? Even if you have, I’m pretty sure you can relax and lay to rest the age-old superstition which dates back (at least) to our Roman ancestors. (I say at least because there were many ancient cultures with similar beliefs about the mirror and it’s ability to reveal the soul.) The idea stemmed from a belief they held that A) mirrors did indeed reflect the soul and B) life renewed every seven years. To break a mirror would damage the soul that was reflected in it at the time. Mirror Spiritus suspects our souls are a lot more resilient!

Still, this superstition really got around. Early American slaves were not immune. In their case, they had the perfect antidote. You could wash away those 7 years with 7 hours of soaking the shards in a river heading south.

The superstitions surrounding mirrors involve more than broken pieces however. Some believe death is close by when a mirror falls and breaks by itself. Others are fearful of mirrors in a room where someone has died, lest they catch a glimpse of themselves, as this portends another visit from the angel of death…for the viewer! In Feng Shui, mirrors should be hung at the perfect height to avoid headaches which can occur if the top of one’s head is cut off in the mirror. I have to wonder if that’s superstition or just common sense. And for all you thespians out there, you might be familiar with the belief that looking into a mirror over someone else’s shoulder is likely to bring about some bad luck of your own.

Did you know that mirrors in Feng Shui are believed to absorb the negative energy in a room? That mirrors are used to contact the “other side” and tell the future? And did you know you should cover your mirrors at night lest your soul wander and get trapped on the other side? Did you know that a marriage will be happy if the newlyweds see each other in a mirror? Did you ever hear that burying pieces of a broken mirror could save you the years of bad luck? Or that a girl could catch a glimpse of her future mate by eating an apple and brushing her hair in front of the mirror?

The list of mirror superstitions goes on and on. One can’t help but wonder at the truth that is buried beneath all the fear. Could it be that mirrors really do hold some mystical, other-worldly power over man?

N…yeah, we don’t believe it either. Not because a mirror is an inanimate object with no mystical properties but because the stories and ideas of these properties has been blown so out of proportion with the truth. Take, for example, movies such as Oculus or Poltergeist, which have made mirrors symbols of horror.

We assert that the power remains in the one who uses the mirror as a tool…not within the mirror itself and definitely not with some “other side”. That isn’t to say they can’t help improve an environment or reveal some deeper truth to what they reflect. In fact, mirrors are just as equally symbols of self-knowledge, deep wisdom, and purity in literature and art. At Mirror Spiritus, we lean in this direction and away from fear-based superstitious nonsense. In the end, mirrors may indeed reflect the soul, and that is something to be embraced, not feared…unless you’re a vampire! ; )

Mirror Superstitions
Get the Newsletter