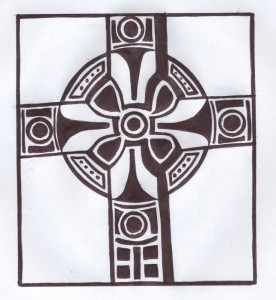 The ways in which mirrors have been used throughout the centuries are fascinating. Surely, their importance in various world-wide traditions points to something quite archetypal regarding our reflection. Did our ancestors understand something we have forgotten? There are, of course, myriad superstitions regarding mirrors around the globe as well, but I’ll save those up for another post. Here, I focus on a few tidbits of mirrors and traditions.

The Celts were an artistic people with a love of metalwork and incidently, mirrors made of bronze, iron, or a combination of the two. Theses mirrors were decorated with the motifs of Celtic art frequently reproduced today and have often been recovered from graves begging the question, “What was their significance?” They are generally regarded as “status symbols” among wealthy women, but was there perhaps a more mystical purpose? Very few Celtic mirrors survive intact, and this wonderful website created by Stephen Markoff, has a collection of fascinating resources and pictures for you to peruse.

In the Jewish religion, when a loved one passes, the mirrors of the home are covered while the family sits in mourning for a seven-day period in order to facilitate the transition of the departed from this world to the next. If the mirrors were not covered, it is believed the soul could become entrapped in this realm unable to transition to the “afterlife”. Of course, the more popular version of the meaning is that the bereaved should not be at all concerned with their appearance during mourning but should rather reflect inward. You can read more about the touching customs of Shiva here.

Yet another culture that buries their dead with mirrors. Perhaps this Serbo-Croation tradition gives us insight into the significance of burial mirrors in the Celtic tradition. The purpose was two-fold: one) it was thought to prevent one’s spirit from wandering and two) it kept evil spirits from rising up, perhaps by providing them with a means of self-fascination in the grave.

Status symbols of the elite and instruments of sorcerers, ancient mirrors have also been excavated from Maya tombs. Typically fashioned of iron or obsidian (volcanic glass), such mirrors have been found placed near the body (specifically the head, the chest, lower back, groin or feet) or at some distance from the body. Interestingly, the Mexican god, Tezcatlipoca, is often depicted with an obsidian mirror at his head, chest, or foot. What was the significance of these burial mirrors? Were they merely prized possessions for their beauty or reflective qualities or were they viewed as portals into other realms?

Do you know of any interesting cultural uses of mirrors?

Mirrors and Traditions
Get the Newsletter