Last year around this time, I went to Oaxaca & Teotihuacan, Mexico with a group of healing-driven colleagues of The Wishing Well. Always an amazing journey, last year’s was no exception. One of the activities we were told in advance we’d be doing was making a powerstick, a representation of our unique ray of light in the world and our will to recover it. I had done this many years before, once when I entered my first Toltec apprenticeship with Gary Van Warmerdam of Pathway to Happiness, and when I entered my second Toltec apprenticeship with Raven Smith of TOCI (then Spiritweavers). Those sticks were both long gone. So I collected new materials and put them in my suitcase.

On the night of the ceremony, facilitated by Oskana Yufa, as I witnessed others making their sticks, many for the first time, something in me didn’t resonate. I didn’t want another stick encased in red cloth with two feathers attached. I didn’t even like my chosen stick anymore. So I ended up not making one. I questioned my decision once or twice that trip, but then I let it go.

Now for those of you who don’t know me well, since I returned from that trip to Teo, I’ve been having the worst year of my life…knotty and bent like the stick I’d chosen. It has been so, so difficult. But everything has finally started to shift for me in really big ways after that last eclipse we just had. It’s been so magical. And man, have I earned it! (Whatever that means!)

A few days ago, having come through quite a bit of pain to a place of deep surrendering, I drove to a park (it was raining) to let quite a few pent-up tears finally go. I decided that I would not let this excruciating year be for naught. Whatever I’d experienced, I would use it to empower myself and triumph. I would be there for myself no matter the outcomes to situations in which I found myself. I would move towards what I want and away from what I don’t and stop being afraid all the time. And I would be absolutely honest with myself and others in the process. It would all serve to make me a better healer and human being, because that’s the way it is and the way it will be. Afterwards, when I opened the car door, right at my feet on the ground was a stick. Not having thought about power sticks for a year, I recognized it instantly as a power stick presenting itself to me, so I picked it up and took it home. Interestingly, the day before I discovered my stick, I received an initiation into Tera Mai Reiki from founder, Kathleen Milner. In a meditation with her, two feathered serpent heads came barreling in from behind me breathing the fire of Spirit.

Before I did anything with my stick, I wanted to just sit with it. Upon examining it, I saw that it had two ends emanating from a knot in the middle. I knew that one end would represent my bound and conditioned self, the knot would be the pivot point (or point from which I can change my perspective in any moment), and the opposite end would represent my unconditioned, creative, potential self (something that wouldn’t have been if I’d made the one in Teo).

I needed to buy materials to make my stick, so off I went to the fabric store two days later. My expectation was that I’d make half the stick traditional using the red cloth and half as anything I wanted. But when I got to the store and started looking, the reds just weren’t speaking to me. After trying to make my “free choice” fabric fit with red, I spotted the cloth I wanted for my unconditioned self…a really fun peacock-inspired print with all of my favorite colors in it that spoke to me of unlimited possibility, creativity, and joy. The red would have looked awful with it. So, breaking with tradition (par for the course), I chose gray for the conditioned self instead which spoke to me of the clouds that roll in and obscure truth, of the colorless habits and dullness of spirit that enfold me when I lose awareness. In addition, instead of thread or string, I bought colorful leather strips to bind it all.

I wrapped my stick that night and really enjoyed feeling creative again after such a long year of feeling on again off again from my creative self. I still had the two feathers I’d found last year…a crow feather and a hawk feather…so I tied those to the stick as well. I also had a gorgeous obsidian stone to place at the pivot point given to me by my Wishing Well colleague, Mike (thanks, Mike!), so I have a bit of Teo represented.

There was something missing. So over the next couple of days, I went to two different bead stores to find further symbols and colors to decorate my stick. Oh, lord, was I in heaven! All those shiny, sparkly pretty things to choose from in every color imaginable! I had already seen amber in my mind’s eye so I chose two amber beads for protection, purple beads for Spirit, a lapis bead for clear vision, and other beads just because I loved them. I chose rose quartz and a key which hangs from the conditioned self reminding me I can unlock the prison of a mental state at any moment with an easy shift to the heart. 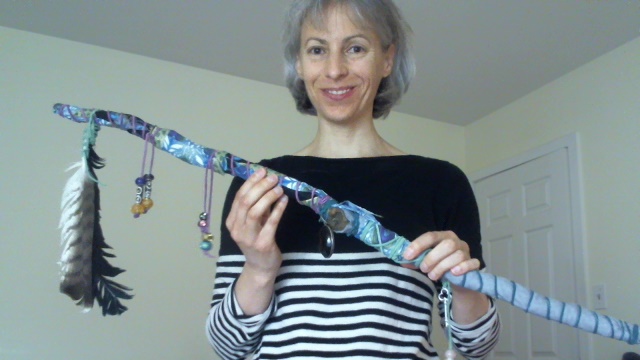 There’s more symbolism present, but you get the idea. I had so much fun creating my stick, a stick that carries so much meaning for me, and am grateful for the completion of a task intended an entire year ago. Now I use it in meditation to shift my awareness when I realize I am stuck in the conditioned self. I don’t even need to hold it; I can just visualize it and flip it in my mind.

I can’t help but connect it all together: my trip to Teo last year, my new relationship and marriage, the timing of the eclipse, the Reiki, all leading to such powerful and profound shifts within my being. Along with all of these came a bolt of lightening this week which finally reset and grounded my inner compass in more ways than one. I’ve let go of some things that were no longer serving me (mostly bad habits, like sugar, and trying to force things, for example) and recommitted myself to my own healing. It all feels really, really good. It’s a powerstick shift!

Powerstick Shift
Get the Newsletter