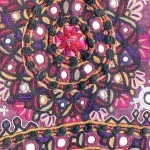 Did you know? Shisha embroidery is the craft of sewing tiny mirroring objects to fabric. It originated in 17th century India (supposedly with the wife of Shah Jehan who built the Taj Mahal in her honor) eventually spreading throughout Asia and the Middle East. Interestingly, Native Americans are also known to have used mirrors to decorate their dress supposedly seeing them as symbols of wealth and prestige (though Mirror Spiritus has a much more spiritual theory on their usage by tribal cultures). Whether sewn on clothing or into domestic fabrics such as tablecloths and hangings, shisha is used in some cultures to throw off the “evil eye”, whether this was believed to happen because it reflected the evil away or because it dazzled and distracted, one cannot say. Mirror Spiritus finds shisha a delightful means of bringing more light into our world. (And the “evil eye” protection can’t hurt!)

The mirrors most often represent the center of flowers or the eyes of animals. In wall hangings, they sometimes represent the ears of the Sun God or the breasts of Radha, so they aren’t random decoration traditionally. The video above demonstrates (in a rather meditative fashion) how the mirrors are affixed to fabric.

For those of you who have never had the privilege of seeing the Native American “Jingle Dance” live, take a look at this video. Though it is not related to Shisha in an obvious way, Mirror Spiritus would speculate that the numerous rows of shiny metal bells perform a similar function…to bring in more light and cast out darkness. What do you think?

Shisha Embroidery
Get the Newsletter